My Trading Journey
The ups and downs of my 27 year trader career. I laughed – I cried – I lost and  made a lot of money. 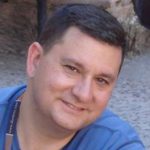 Hey thanks for tuning back in..Here’s a quick recap…

It’s 1995, I finally became a successful trader,  and currencies are my thing.

But.. like a moron I decide to trade everything I can get my hands on.

I lost a bunch of money and learned some valuable lessons along the way.

Why do lessons have to be so costly?

Why is it that as human beings we can’t learn a lesson unless it really hurts.

If you’re reading this, and you happen to be a psychologist or a  psychiatrist and know the answer, please email me and share it.

Hell, even if you’re a podiatrist or a dentist and know.. Please share.

September 1995, me and my bride Lisa decide to get away .. an impromptu vacation.

Club med has this new gimmick where they give you a massive discount, but don’t tell you where you’re going.

Well we’re young and that sounds adventurous, great… we’re in.

And off we went the following morning to Guadeloupe.

Ya … except that Guadeloupe was recently hit with a hurricane, and much of the island  was under construction.

What does this have to do with trading.. You ask.

Well, before I left I was short the Deutsche Mark to the tune of 10 PUT contracts.

The position was well ahead and still had plenty of time to expiration.

I debated covering before I left, but decided I had plenty of wiggle room.

I was sitting on a $12k profit and the contract expiration was 1 month out.

When we arrived, I called the broker, and learned the position was now ahead $18k

I could kick back and enjoy the vaca knowing the profits were rolling in.

Not so fast GM…

When I tried to reach the broker the next day, I learned that all the phones on the island were down… emergency calls only

Banner number 2 on my office peg board.

$20,000! that could be the most anyone has ever paid for a Club Med vacation.

Just so you know..I have No products or services of my own to sell.
As a veteran of the industry however, I have connections with the highest quality financial educators and publishers all over the world.
I’d like to share with you some of the best and most potentially profitable moneymaking systems and tactics in the market right now.
Here’s three killer presentations on making potentially HUGE money from some valued and respected colleagues of mine.
You can see them here.